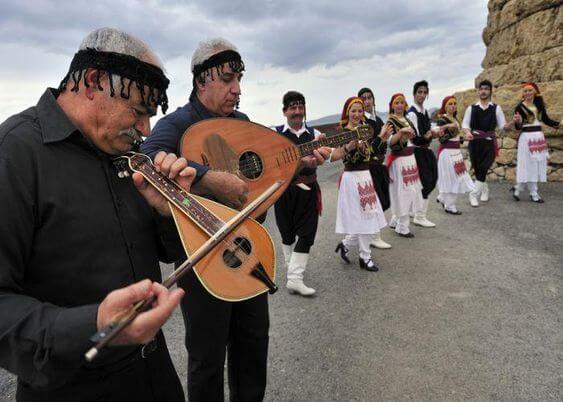 Greek dance on the island of Crete is typically accompanied by live music. Image via Greeking.me

This is a guest blog post by Kristina Headrick. She is the founder of Yia Mas, a brand and workshop series that teaches about the intersection of Greek culture and wellness. She grew up Greek American and travels to Greece as often as she can. She studies Greek dance independently and has quite literally danced since (or perhaps before) she could walk!

The dances and music from my grandparents’ home country of Greece have been a way to understand, study, and connect with the culture. As a diaspora Greek, it’s one of the best ways to feel connected to the land and culture when you simply can’t be there. If you’re based outside of Greece, it’s possible you’ve seen these dances performed and presented in a formal manner, with Greek folk costumes and traditional music or instruments. There is also dancing as it happens at many Greek celebrations such as weddings and baptisms: no costumes, and a mix of traditional Greek with more modernized Greek pop music, much of which plays on the musical themes of the past. Here, we’ll address some fusion of the two, as Greek dance is still alive and evolving, but many dances are also connected to rites and contexts that no longer apply. Greek dancing and music are still very much alive and evolving, perhaps more relevant and needed than ever. While its roots are Hellenic, in 2020 this form of movement can be for everyone, regardless of their background. It’s also a great way to “travel” to Greece if you can’t this year!

As humans, it benefits us to connect to nature and celebrate the cyclical nature of life on earth. Dance, and Hellenic dances in particular, facilitate this experience and connection. Hellenic (Greek) peoples have danced since ancient times and for many occasions. On ancient pottery we see people dancing holding hands dancing, oftentimes around altars.  We often dance in circles (Kiklos), and in doing so, we form a union. Sometimes we improvise, sometimes it’s more unified, sometimes you dance as a couple, it all depends on the region and context. There are many types of Greek dance and their style varies immensely according to region. The dances from the islands, for example, have characteristics you may expect from island people: the music is lighter, the movements more playful, and the dances can be more “hoppy.” On the other hand, many dances from mountainous mainland Greece feel heavier, both in step and instrumentation. 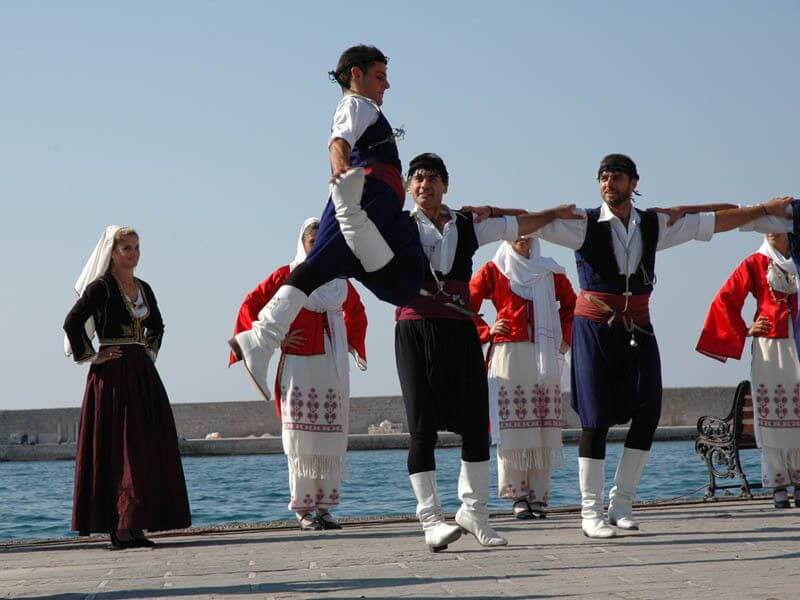 Cretan dances. There special turns and solos people take throughout.

Greek music is a confluence of many cultural and geographic influences that make for a diverse, dynamic soup. Greek dancing and music is made all the more interesting by Greece’s geography. Our unique music is influenced by all things Balkan, Persian/Eastern, and “Greece” itself. Greece has always been a bridge between East and West, which is heard in much of the music. While Greece is part of modern-day Europe, the music and dances remind you that people have always been traveling and participating in cultural exchanges via trade routes. The instrumentation reflects this. There are many purposes for these dances, including for marriage rites, celebration, war & exercise (Pyrrhic), courting, mourning, love, rites of passage, ecstatic experiences, and even dream states! There is also a lot of cross-pollination in the world of Greek dance.  Instruments are many and vary by region. Many have changed over time, while some have been in use for thousands of years (think back to those images on pottery!) and remain in use today. For example, the clarinet, which is incredibly popular in traditional Greek music, is actually a more recent introduction, while the flute/woodwinds are ancient and also still in use. Vocals and call and response were and remain incredibly important, call and response are heard in many traditional songs. 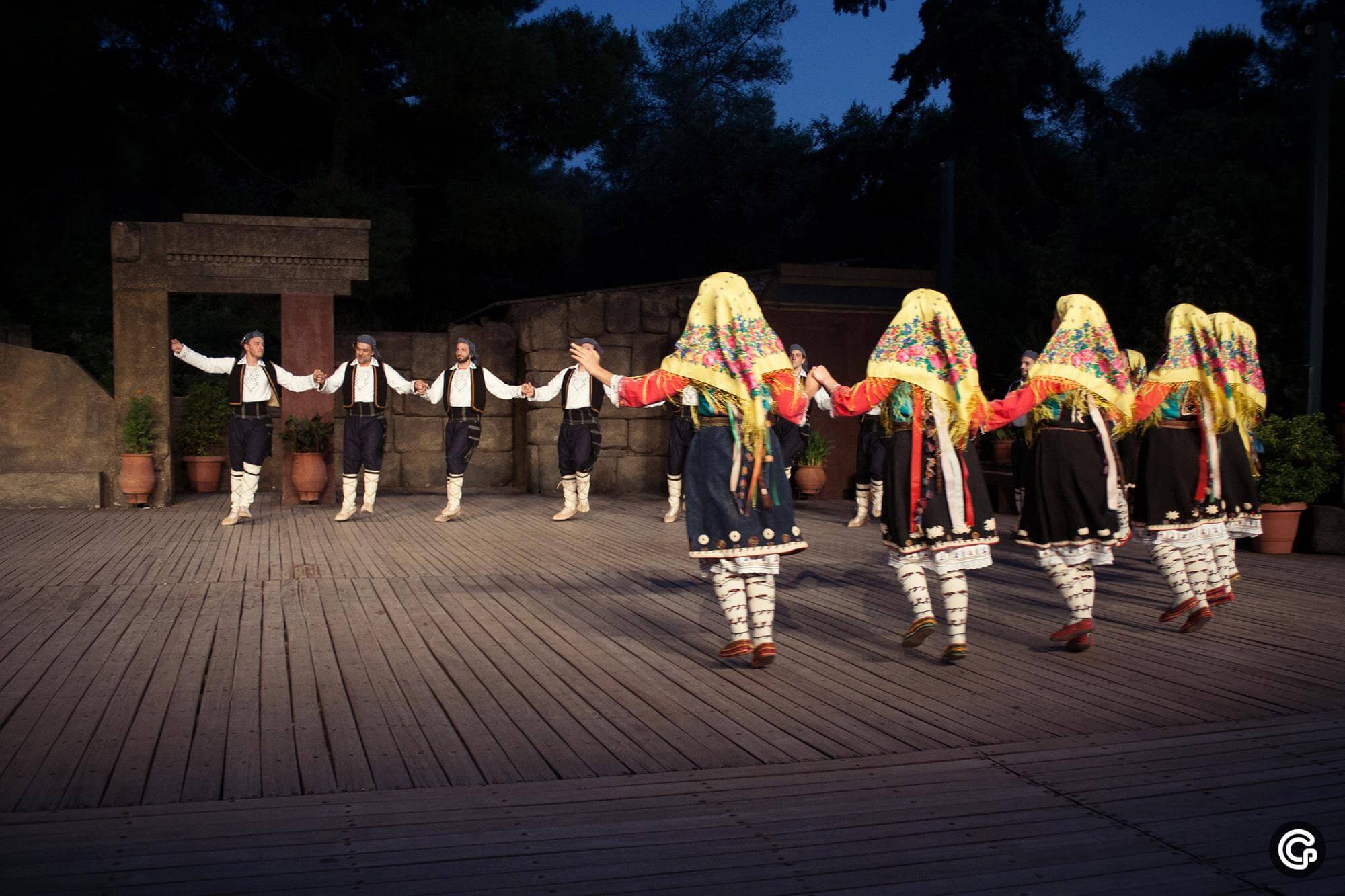 Greek dance at the famous Dora Stratou theater in Athens. Dora Stratou preserved and studied many dances from all over Greece. Image via Grecomania.

The sounds and vibe of summer

If you travel to Greece during the summer, you may be lucky to fall upon one of its “panigyria.” These are festivals centered around religious dates, typically a saint’s holiday. Many of these echo the Dionysian past (as do many Christian traditions) that connect us to the seasons, cycles of human life, and to each other. The word panegyric refers to a public speech or testimonial in praise of someone or something, and it follows that each panigyri is a dedication to a saint. A panigyri in Greece may last well until the morning! Inarguably, the largest day of celebration in Greece happens August 15 on the Dormition of the Mother of Jesus (Virgin Mary). Good luck finding any businesses open on this day, widely observed in Greece. Your best bet is to plan to be at Panigyri, eating lamb and dancing among the locals in a mountaintop village.

Greek dance for health! Why and how:

Movement and community are necessary for health on this planet! Our ancestors were onto this without the “scientific” backing we have today. Studies show(1) that a sense of belonging and purpose greatly enhance our mental health. While we are of course not living in the same contexts and societies within which these dances developed, we can still benefit from them. As Greek dancing typically involves holding hands and staying on step with a specific move, it helps bring us into the present moment. In fact, it’s hard to be doing much else, let alone being on your cell phone!  As mentioned, with much Greek dancing we hold hands or dance with partners, which makes for a beautiful communal experience. You quite literally feel the people you’re dancing with. It’s a great way to connect to our general interconnectedness as humans, especially at a time when people are lonely and in some ways, many of us are more isolated than ever. This is also a much needed reminder of how interconnected we are when data shows that depression rates are on the rise. Finally, after hours of dancing in circles, you may find yourself in something of a trance-like state!

When we dance or are at a “glendi,” we hope it will be infused with Kefi. This is one of those words for which no direct English translation exists. You may loosely define it as “fun, the spirit of joy, or enthusiasm.” Think of it as that immeasurable spark felt at an event, festival, concert, or on the dance floor. You can’t plan for an event to have Kefi, but you know you’ve been on a good dance floor if you can look back and say “that wedding really had kefi!” I also believe that with Greek dance, you can set up the conditions to infuse your life with this joy. Greek dance and music, combined with a loving crew, is a recipe for kefi.

We hope you’ve enjoyed reading this introduction to Greek dance and how it can help you travel to Greece when you can’t actually be there, and also find more joy in your life!

See below for some links to popular Greek dances:

Thrace (example of call and response)

Naoussa (very famous around Apokries/Carnival, the only time of year this is danced)