We had the pleasure of having Liz and Angela Schaffer join us in India  a few years ago. The following is a an excerpt from the India issue of Lodestars Magazine written by Liz Schaffer. Thank you to Liz for the wonderful story and to Angela for the photography.

In India, I highly recommend relinquishing control. You can read all there is, ask pre-travel questions, immerse yourself in a period of diligent cultural study, but nothing quite prepares you for the moment of arrival. India will defy all your imaginings. It will consume you, terrify you and leave you besotted, swept up in a romance never fully understood and almost impossible to explain. Having discovered all this on previous trips, I joined a group travelling with Delectable Destinations, who specialise in intimate culinary-focused tours.

And so I landed with little more than wide eyes, safe in the knowledge that there would be a guide to lead us along the Golden Triangle; someone who knew what to eat and where to eat it – encouraging wanderlust whilst reminding us that here there is no ‘correct way’ way to dine. Instead, it’s about savouring flavours and the moment, appreciating regional diversity and discovering just how much a country reveals itself through food. Control is a difficult thing to abandon, but the prospect of an Indian epicurean excursion with fellow foodies filled me with joy. 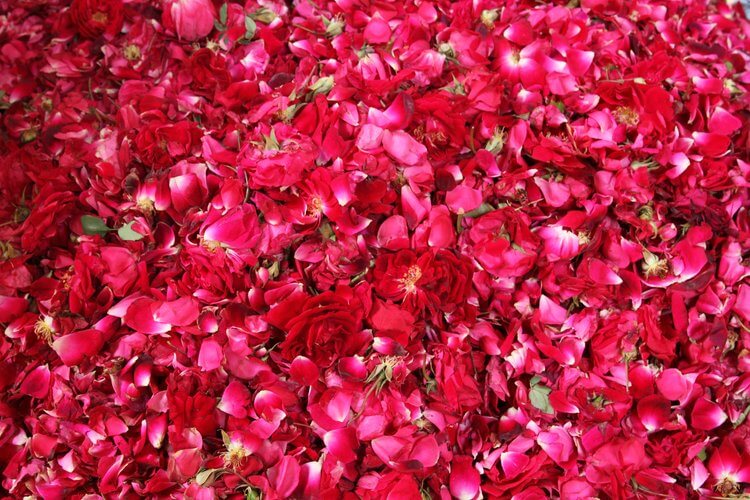 Arriving in Old Delhi is like entering a movie set; a thunderous, fast-moving scene watched over by monkeys pondering discarded newspapers from power lines. On these streets people cook, converse and shave with the aid of mirrors borrowed from abandoned scooters.

We’re in Chawri Bazar, a hardware market since 1840 that, with around 30,000 stores, remains the largest in Asia. If you can imagine it, you’ll find it here. It’s the first full day with Delectable Destinations and we’re nervous, taking travel warnings far too seriously and anxious to see how our stomachs will fare. So when our guide offers us something from a street vendor I hesitate, just for a moment, before journalistic curiosity forces me to accept. It’s Daulat ki Chaat – buffalo milk and sugar that tastes like airy merengue and is only available for two months of the year. And with that, bliss written across my face, the culinary floodgates open. We enter a dimly-lit store hidden down a side street, pastries piled high by its entrance, for curried chickpeas eaten with puffs of lentil paste deep fried in ghee. We pass Paan sellers and the remains of forgotten havelis and ascend a flight of stairs to the flower market, a series of stone rooms overflowing with petals; marigolds, roses and jasmine scenting the air. Another stairway leads to a series of interconnected rooftops. From here we watch as sacks of spices are loaded onto bicycles, sneezing the entire time due to the crushed chillies lining the ground. 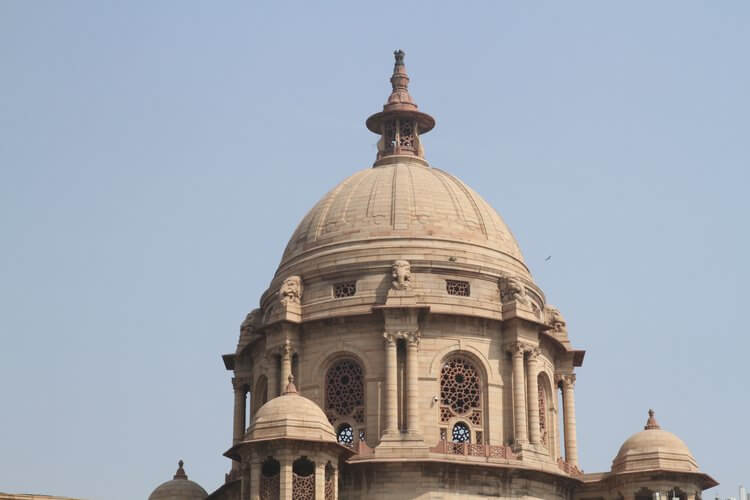 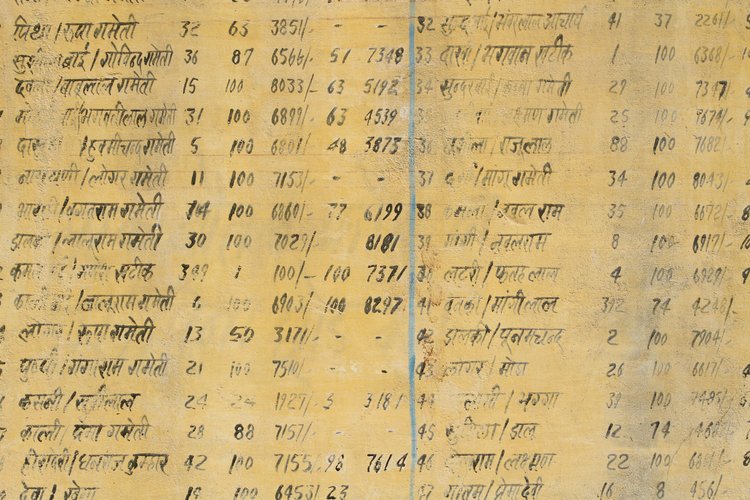 It is in New Delhi that you’ll find many of the capital’s landmarks, from India Gate and the 330 acre President’s Palace to Gurudwara Bangla Sahib, an ornate Sikh temple where thousands are fed daily, the kitchen filled with pots large enough to bathe in. There is much in this city to feast upon – from the creative re-imaginings of traditional dishes at Farzi Cafe to lengthy breakfasts amidst the grandeur of the Art Deco-influenced Imperial Hotel, and the Indian fusion of Indian Accent, our exchanges at the latter consisting of little more than “oh my god” and “I know”. But the most fascinating culinary excursion involved a visit to the INA Market with Neha Gupta of Saffron Palate – Delectable Destinations is all about working with and promoting local companies. Offering a mix of Indian, Western and Chinese ingredients (live chickens and goat heads sold alongside spices and pashminas) and named after the Indian National Army who formed to fight British rule, here we gathered ingredients before returning to Neha’s Hauz Khas home for her North Indian cooking class. We attempted to master jeera aloo (potatoes with cumin seeds), biryani, butter chicken and chick peas in tamarind sauce, yet her greatest gift was a recipe for a ubiquitous condiment, mint coriander chutney: blend 500g coriander, 250g of mint, 2 cloves of garlic, 1 green chilli, 1tsp sugar and 1/4 tsp salt with a little lemon juice and serve with yogurt. 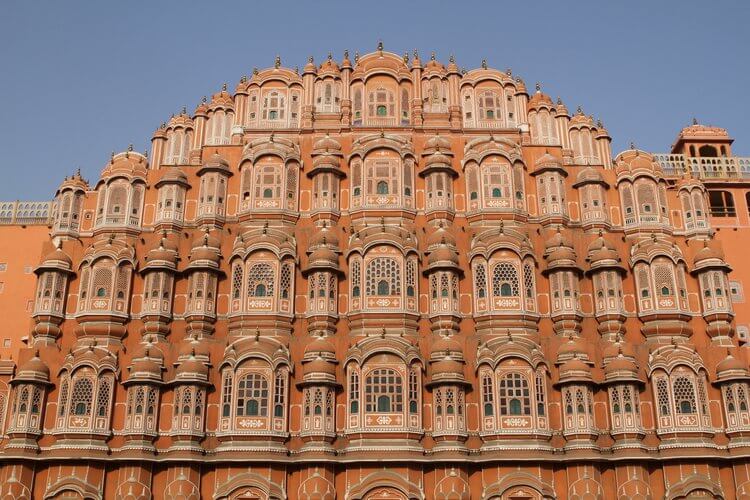 Jaipur is paradise, with added pandemonium, a place where pink is abundant – the shade first applied to impress Prince Albert on his 1876 Indian tour. Visitors flock here for the hue alone, yet delight in sites like the observatory of Jantar Mantar and Hawa Mahal, built in 1798 to allow women of the royal household to watch daily life unfold from behind veiled windows in this bejewelled wedding cake of a structure. And then there’s Amer Fort, a sandstone and marble marvel, framed by rose-tinted mountains, where there’s much to enchant – not least Chand Pol (Moon Gate), which separated public and private life, and Jai Mandir (Hall of Victory), which is adorned with mirrored mosaics designed to looked like the captured cosmos. Made from 42,000 pieces of Belgian glass, it’s inspired by Tehran’s Roseland Palace.

Walking Jaipur’s streets, you’re stuck by the profusion of jewellery stores, each as demure as the last. Famed for its rubies, emeralds and topaz, one in seven of the world’s gemstones is cut and polished in this city, which has been a centre for jewels for over 400 years. There are entire alleys dedicated to wedding cards, traditionally hand delivered by parents of the happy couple to anywhere between 500 and 2,000 guests, and temples, with stone elephants standing by their entrances. Watching over all of this are ornately decorated houses, no less magical for the marks of time they bear.

Jaipur’s street food has always attracted the curious, with families running the same stalls for generations. It’s inexpensive, regional and, as before, best sampled with a flavour-loving guide. I ate pakora (fried potatoes and aubergine) that had been prepared to the same recipe for 129 years and looked utterly unpretentious yet became spicier the longer you held it in your mouth, namkeen (flour, spices, lentils and peas) and lassi. Our wanderings ended with a stop at The Pickle Man of Rajasthan, a pastel purple store that’s been pickling and preserving for over a century, hand-painted signs announcing all that is on offer.

As if to remind us of the country’s contrasts, our second cooking class was held in the gardens of Relais & Châteaux’s Rajmahal Palace. Owned by Jaipur’s royal family, this hotel is known for the restaurant 51 Shades of Pink, and for building their menus around recipes on loan from the royals. It was lovely to see that even when surrounded by such lavishness, ghee, garlic and onions formed the basis of almost every dish and that spices were ever-present. Each of India’s 190 spices possess medicinal properties – turmeric is an anti-inflammatory, cardamom aids digestion – and recipes across the country are adjusted to fight particular ailments, a little extra fennel, chilli or coriander as needed. 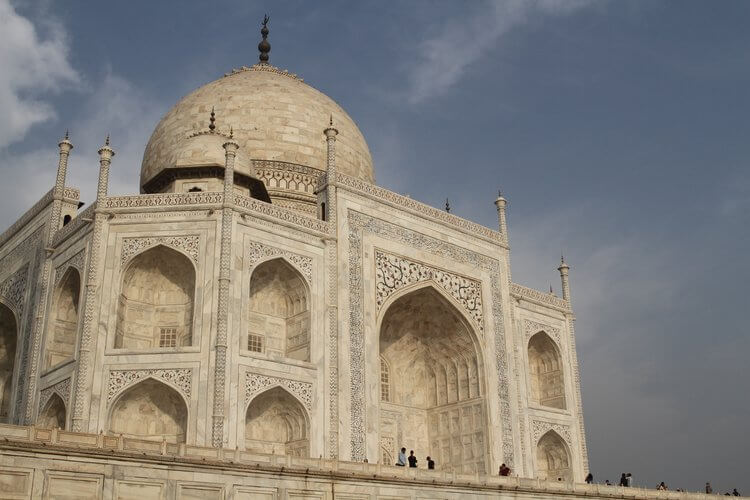 Once known as the land of beggars and snake charmers, it was from Agra that five Mughal emperors ruled India, these master strategists drawn here by the region’s wildness. We were lured by slightly different desires – to dine on thali (a meal adored in the south made up of a selection of curries and sauces) at the Oberoi’s palatial Esphahan restaurant and to wonder at the magnificence of the Taj Mahal.

Built by Shah Jahan as the tomb for his favourite wife, Mumtaz Mahal, you can gaze upon the Taj Mahal innumerable times yet it will never seem entirely real, its symmetrical perfection difficult to attribute to human hands. Approaching it, white marble glowing gold in the morning light, our guide soberly reminded us that when talking about Taj Mahal legend the truth should never get in the way of a nice story … before rattling off a series of numbers. 3,000 elephants were used to transport the marble from quarries in Makrana, 300 kilometres away, carrying so much that the tomb could have been constructed 40 times over. All told, 20,000 people worked for 12 years constructing this architectural icon, which is adorned with 500 kilograms of gold, lace-like marble and unfathomably intricate inlay work, shards of onyx, jade, jasper and coral so minute they’re impossible to see with the naked eye. 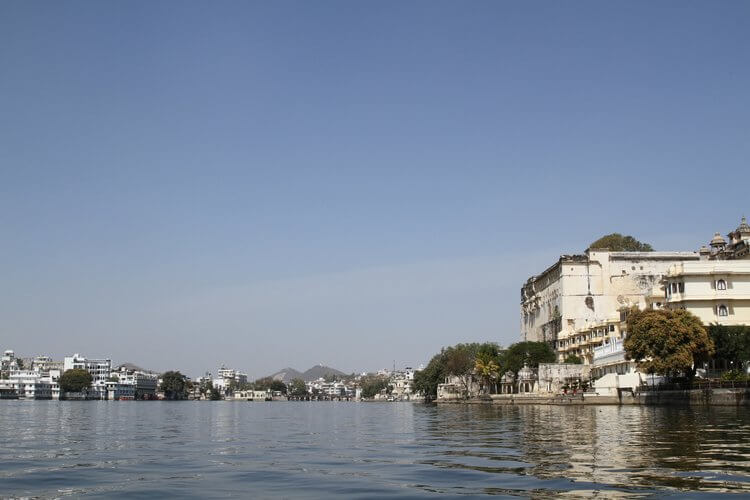 Long adored by the Bollywood set, Udaipur is not entirely of this world. Built around the man-made Lake Pichola (which had a starring turn in Octopussy), Udaipur’s waterfront is dominated by the immense City Palace. A hotel, museum and private residence, its gates bear spikes to stop charging elephants, ornate turrets look as though they’ve been added at random, and stained glass, frescoes and mosaics fill the interior. Across the water is Jagmandir Island Palace. Built as an island for concubines, today it’s ideal for wedding parties and long lunches; stone elephants with trunks raised in welcome greet all who arrive, whatever they’re hankering for.

An artistic city, Udaipur is renowned for its miniature paintings, with contemporary practitioners working in places like Royal Art and Crafts taking up to six months to complete their incredibly detailed work, painting on everything from silk to camel bone. For those seeking an introduction to the region’s music, dance and puppetry, evening performances at Bagore-ki-Haveli are highly recommended. Nearby is Jagdish Mandir, one of the city’s 700 temples. Found up a flight of steep marble stairs, holy men pray by the entrance as chanting and the scent of incense wash over you.

It was here I was struck by the fact that, In India, spirituality means something. There is an energy to these temples. Young and old pray together in absolute devotion, giving themselves over to the moment. People talk about coming to India to find themselves, but I wonder if instead you travel here to forget yourself, to realise that you’re just one of many, united by uncertainty and a desire for connection. Here life is a shared experience. You see it all, destitution and pain are public matters. But there’s also such joy and celebration. You lose yourself here because you’re reminded that life, sadness and elation are universal, and perhaps it’s right that none of it should be hidden. 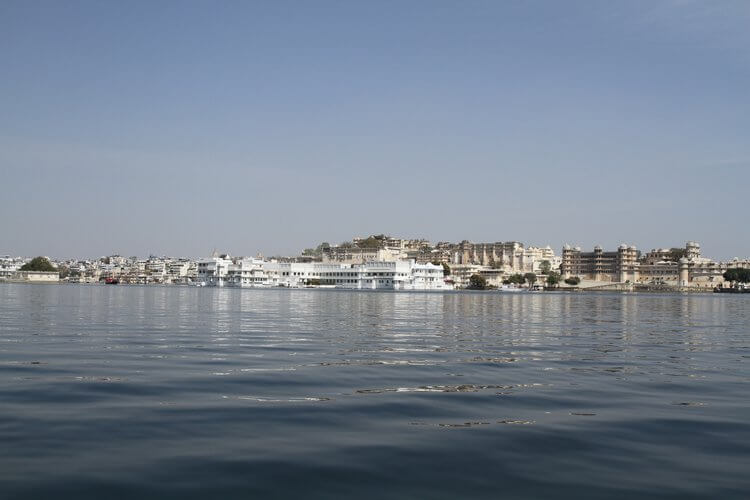 Our journey with Delectable Destinations concluded at RAAS Devigarh, just beyond Udaipur. When we’d entered through the main gate, beneath a garlanded Vishnu, rose petals were thrown from above. Dinner was a multi-course celebration of local ingredients (the rose petal ice-cream a particular stand out), with much of the produce grown on site. In the blue distance the mountains glowed, frangipani filled the air and the stone houses of the town below, each a different shade, were festooned with washing. This palace-fortress-turned-hotel is an oasis, but one that cares for the communities within and around it; such aegis is exemplified in Delwara.

Referred to as the ‘town of gods’ Delwara boasts 1,000 temples, each dedicated to different Hindi and Jain deities, and walking through it you find a community far removed from the Delhi rush. Here cattle turn waterwheels, shepherds sing to their goats and women run the fields. Such moments, settings and scenes remain in the mind long after the tourist travels on, along with a dreamlike sense of unreality, the feeling of having been granted access to wonderful secrets. It was a fitting place to bid farewell. In a country this complex, so full of surprises and wonder, even given a lifetime, I don’t believe it would be possible to truly see it all. Perhaps you can only ever hope for a taste of India’s infinite feast. 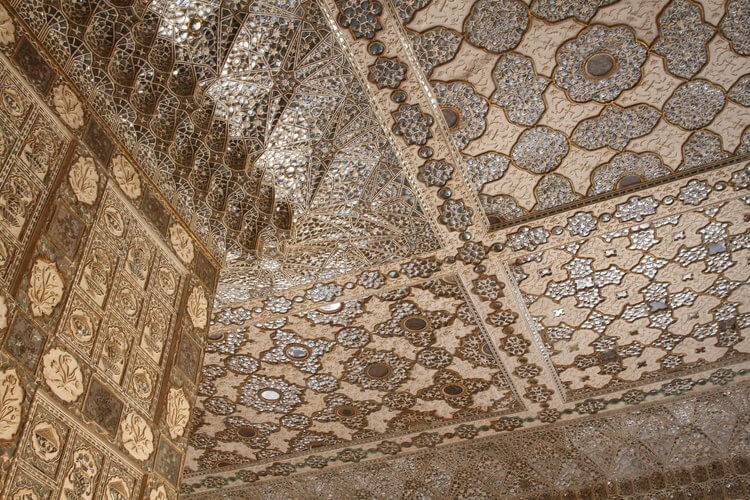 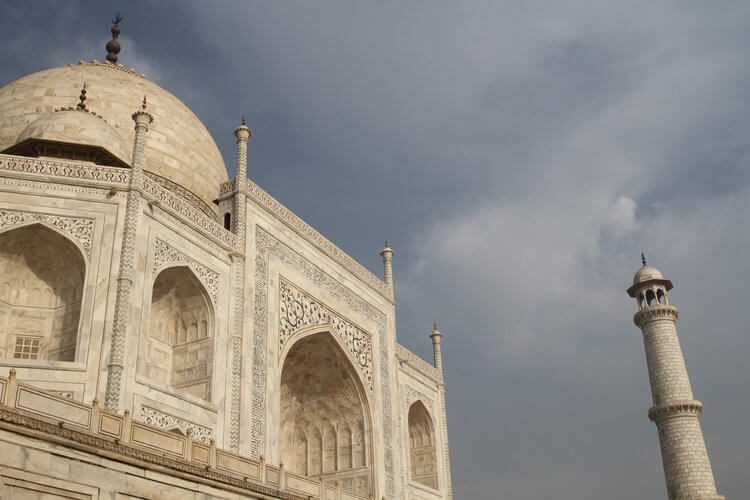 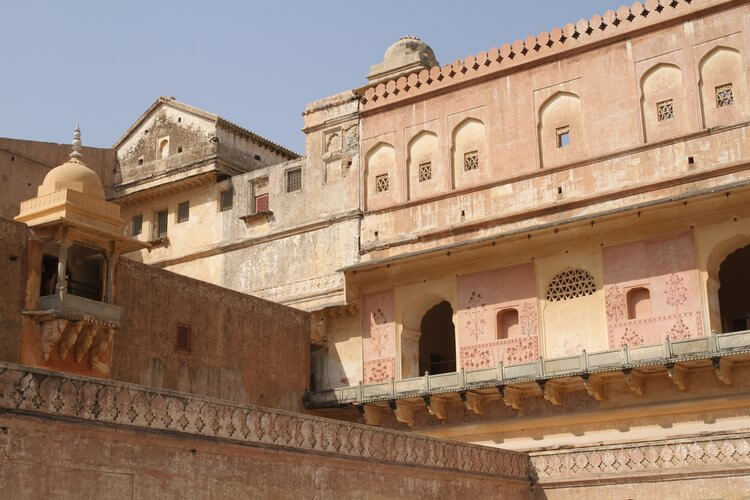 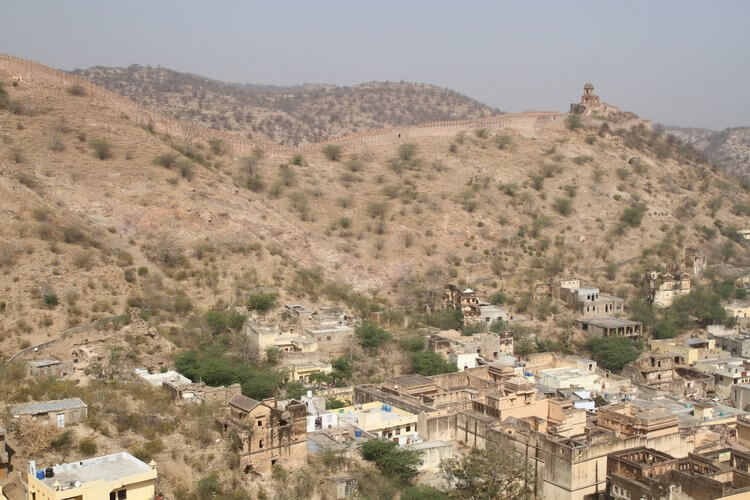