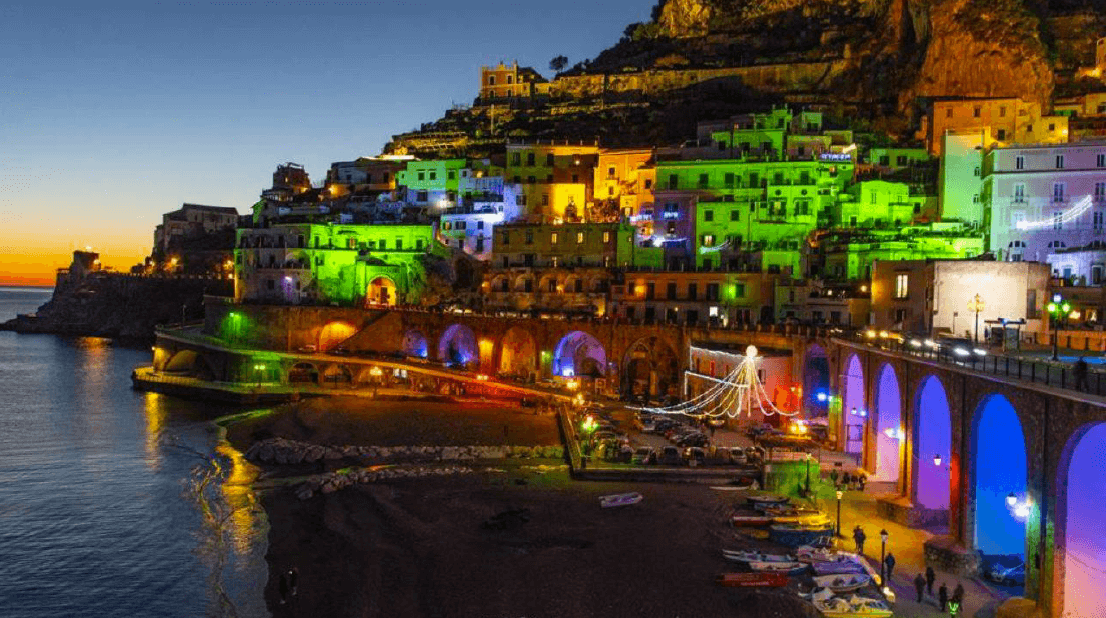 We’re excited to share a special guest post today from Alfonso Vincenzo Mauro. Alfonso is an incredible guide and scholar who’s local to Vietri sul Mare on the Amalfi coast. The post is a treasure trove of history and humor about the Christmas traditions of one of Italy’s most famous regions. His historic tours of the town are a highlight of our Delectable Destinations Amalfi Coast experience. He also hosts vineyard wine tours at Le Vigne di Raito vineyard.

As self-contradictory as it may seem, given the title of this brief written harassment of your patience, I’ll endeavor my best not to kowtow to the now mainstream risky elation for extremely off-season tourism—hazardous in that, as yours truly is typing on the laptop, English and French echoes from down the road bemoan an atrociously rainy and foggy December day. Don’t get me wrong: Yuletide on the Amalfi coast is a highly appreciable and endearing time of the year to experience, provided your fill of sun was absorbed somewhere else already. You might still luck out with sunny days, but don’t frantically plan your activities around a wishful-thinking dubious assumption. Winter is winter. But it provides an undeniably fascinating excuse to savor a less touristic experience and dive into more tradition, maybe detouring off the beaten gastronomic track too. Staying in Vietri sul Mare or Salerno city might also prove a sounder idea, given the abundance of Art, Archaeology, Christmas lights and concerts and events they provide, along with the usual smart position, more strategically placed in respect to airport, train stations and bus stops/terminals. Anyway, lest you be disappointed, let me state it now that this article doesn’t (and couldn’t) thoroughgoingly delve in such massive a topic as Christmas on the entire Amalfi Coast, but rather pinpoints a couple interesting 101 topics—maybe leaving more material for the years to come: deal?

Now. First things first: no Italian Holiday Season would be its true self with the absence of bagpipes. from big-city squares to the remotest village, the zampognari pipers, dressed up as 18/19th century sheepskin-vested shepherds (so much for comfort!), bucolically kickstart traditional merriments with their timeless eclogue of bagpipe and shawm. Though one might come across them at any time in late November and December, their orthodox door-to-door caroling precedes of nine days (hence the name novena) both December 25th and in some areas December 8th too. Traditionally, zampognari are part of those actors and musicians purposefully instilling and reinstating a rural feel in an otherwise highly commercialized festivity; usually playing in pairs, they perform Italian Christmas carol classics such as “Tu scendi dalle stelle” (“From starry skies thou comest”) and would gladly accept some tipping—which reveals this tradition as originating in old-times shepherds and herders trying to make ends meet during either their winter-pasture trips or simply their unemployed offseason. They’re so ubiquitous a presence in Central-Southern Italy that even nativity scenes started to feature statuettes of them as far back as the 1700. Needless to say, this miniature art is notoriously not concerned with philological reenactments of 1st century AD Palestine. 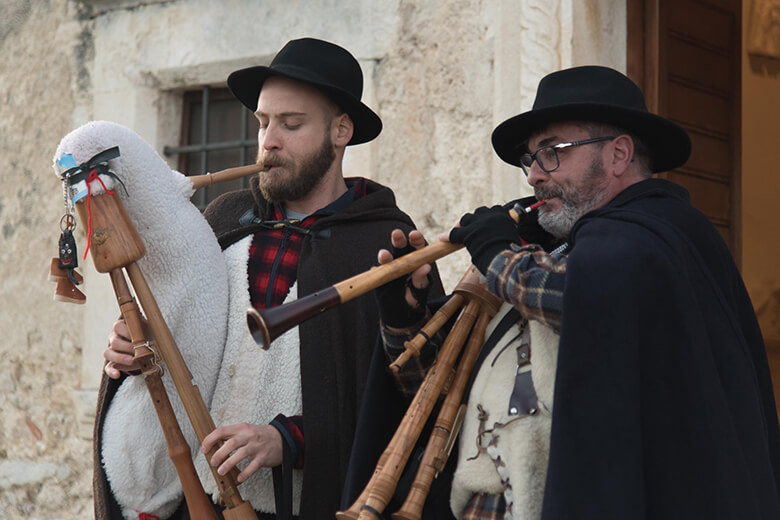 Zampognari pipers; their unmistakably squeaky yet full sound is the soundtrack of holidays. Many young musicians are fortunately keeping this tradition alive. (Photo on the right courtesy of Pio Di Nicola and the artist Mirkò from Vietri)

Many a coastline town, including Marina, neighborhood of Vietri sul Mare, used to salute the end of fishing and seafaring season by signaling mariners a safe dock with a bonfire—we need not speculatively delve into anthropological interpretations now (for sure they abound), but it’s effortless to conclude that such a heart-warming and highly popular practice would, since the early Middle Ages, provide extremely fertile ground for a Christian ceremonial reinterpretation and re-ideologizing thereof: the Immaculate Conception feast on December 8th, precisely. But a quasi-pagan atmosphere lingers on nonetheless, in that it provides some sort of Rite-of-passage experience for teens and young adults concerned with a sometimes reckless mountain-trips search for combustible materials such as bundles of wood and branches to be heaped on and tied around a tripod structure towering feet above the nighttime marching-band-led procession winding statues of saints and folklore-abiding devotees among several resulting bonfires. The never officially stated challenge is: “Who’s gonna make the taller treppiedi (tripod)?”

This festivity is no less observed than Christmas itself, and a conspicuous amount of visitors is summoned every year by its folk music concerts and side events, fireworks, and possibly food booths serving the traditional suffritto offal and tomato soup. Now, before you disgustedly frown at me, remember that time you went to Scotland and felt comfortable enough with haggis. Yup. 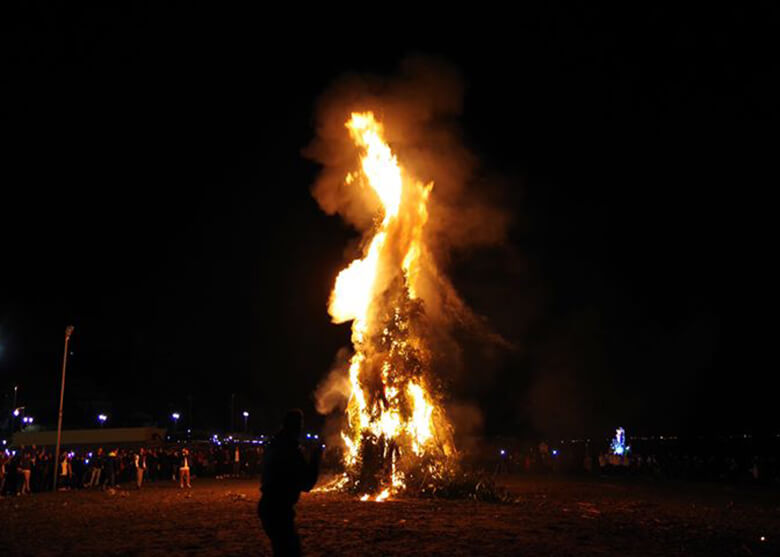 Immaculate Conception processions and bonfires in Marina & Raito, neighborhoods of Vietri sul Mare, Amalfi Coast. Different neighborhoods have their specific event, and, over the years, organizers had to start cooperating and coordinating, spreading them across the entire night lest people can’t partake them all. 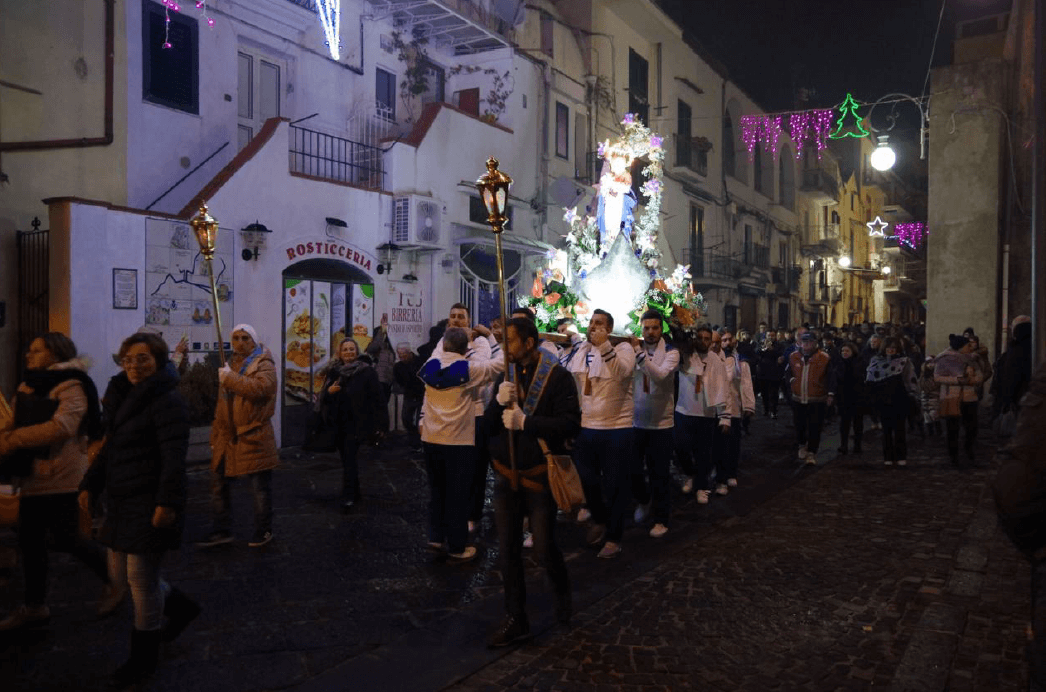 One of Italy’s patron saint processions.

Let the entrails soup not lead you astray: the Holiday Season is a trip to Diabetesland in Southern Italy too, and nothing can better portray this food-coma atmosphere than a visit to grandma’s. Her birthday is in December, and, though in her 90s, her temper is notoriously believed to be able to tear down empires (“Why the heck should I celebrate I’m getting closer to death? ”). “Hi nonna! Can I have a moment of your time? I’m writing about folklore…” “Like you even know *** about folklore, you dummy atheist…”—she eulogized over an I-love-you-but-you-didn’t-quite-turn-out-the-way-I-hoped frown, but at the same time liberally introducing a recipe of hers, one indissolubly linked to December, though sometimes cameoing in Carnival as well: struffoli! Struffoli is a traditional Neopolitan dessert: fried dough spheres roughly the size of marbles, and, according to yours truly, the most delicious unsurpassed quintessence of sugar indulgence! The name is etymologically referable either to the Greek word στρογγύλος “strongýlos” meaning “rounded”, or the Lombardic “strupf” meaning shred of cloth/dough. (Don’t forget Lombards and the Byzantines furiously vied for power in Italy in the Middle Ages.) While the outside of the dough is nice and tantalizingly crispy, the inside is fluffy, making the Struffoli all too easy to shamelessly pop into your mouth one after another! This amazing dessert is incredibly easy to make appearance notwithstanding. 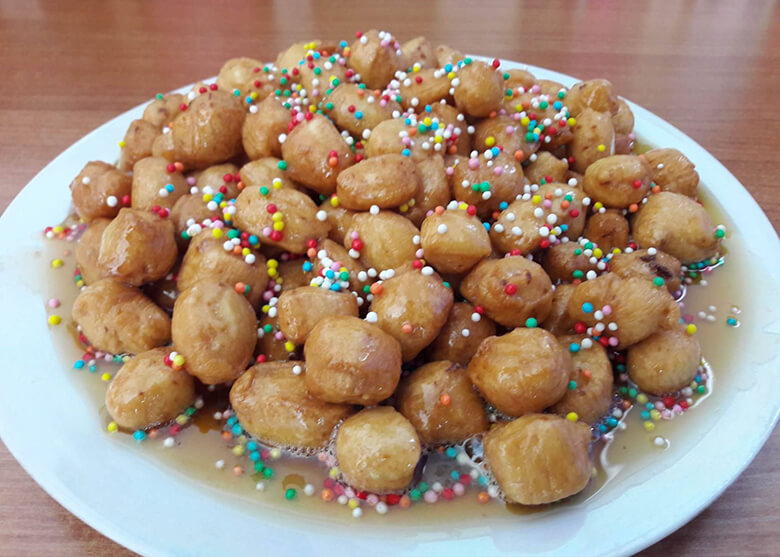 Instructions: In a large bowl whisk together flour, salt, butter, orange & lemon & mandarin zest, sugar and the wine. Add the eggs one at a time and mix to combine; aim at an elastic non-sticky dough (you can vary quantities accordingly). Move the mix to a lightly floured surface, cover with a clean towel and let rest 30 minutes. If the dough feels too sticky or if your house is well heated, let rest in the refrigerator.

Roll the dough into thin ropes, deciding now the size of your struffoli; cut to make small cubes and briefly roll each cube into a ball. They must all be the same size and shape. Deep-fry in batches, in abundant hot peanut oil; turning them a couple of times and when golden draining them on a paper towel-lined plate. Let cool. 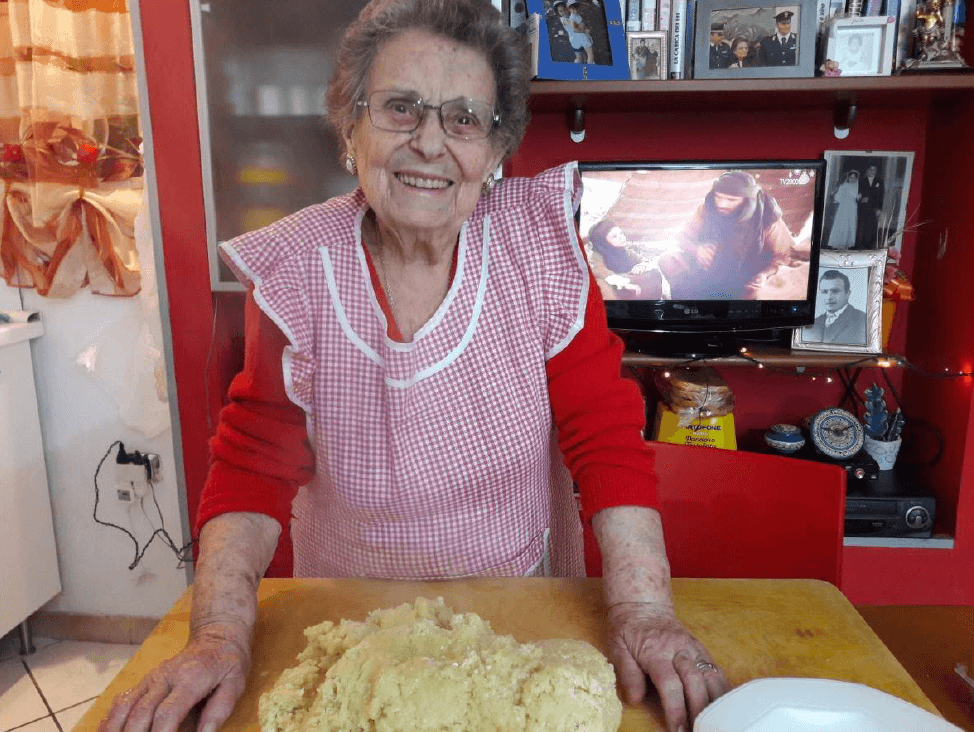 While the struffoli are cooling, heat the honey until warm and slightly watery. Add the cooled struffoli, remove from the stove and mix, then sprinkle with sprinkles, candied fruits and aniseeds. Let sit at least a hour and then serve. The ingenious thing concerning struffoli is that they can sit on your kitchen counter literally for days and never truly spoil—now I don’t mean you deliberately stretch the trustworthiness of my words (haha), but nonetheless this is a dessert that nonna prepares at least one day prior to the meal it’s supposed to end, the BIG one in my family actually being Christmas eve’s dinner and not Christmas lunch. Needless to say the Amalfi Coast is predominately concerned with a seafood & fish cuisine, therefore one can safely conclude that relating a menu can be more elatedly experienced, given the more punctual reference to the local once-flourishing seafaring and fishing economy. This sort of healthy parochialism shows in people too tremendously—grandma, though having spent most of her chutzpah life in Vietri, is originally from another Amalfi Coast village, and her Italian (and dialect) inflection and pronunciation sometimes do bewilder us. While any dessert wine can be here successfully paired, to such a mellifluously tempting height of Southern Italian patisserie you just have to search the same territory for a compatriotic enological expression well matching the honey and the aniseeds, like “Laureto” Passito di Falanghina del Sannio by “La Guardiense”, “Mel” Passito di Fiano
e Greco di Tufo by Antonio Caggiano, “Fastignano” Primitivo by Cantina Papa, Piedirosso dei Campi Flegrei Passito by Grotta del Sole, or “Don Fà” fortified wine by “Fabio de Beaumont”

Instead of an Italian Christmas carol, for they’re either omnipresently religious or just a rendition of English and German ones, I shall, for now, part ways with you with a poem by Giuseppe Ungaretti (1888–1970), Italian modernist poet, essayist and critic, journalist, and academic; leading representative of the experimental poetic movement known as Ermetismo (“Hermeticism”), and among the most prominent contributors to 20th-century Italian literature. Ermetismo was concerned with subjective language and imagery, averring that the evocative power of words is as important as their meaning; and opposed verbal manipulations, utter rhetoricity and the ease of mass communication taking place during Fascism. The group utilized a notoriously difficult and knotty diction, with strong emotional introspection and a link to symbolism, starting with the name alluding to the mythical Hermes Trismegistus, alleged author of mystic doctrines of Neoplatonism.

Leave me thus
objectlike
laid
down
in a
corner –
forgotten

Here
nothing but-
is felt-
the good warmth

I be
with the four
somersaults
of fireplace
smoke. 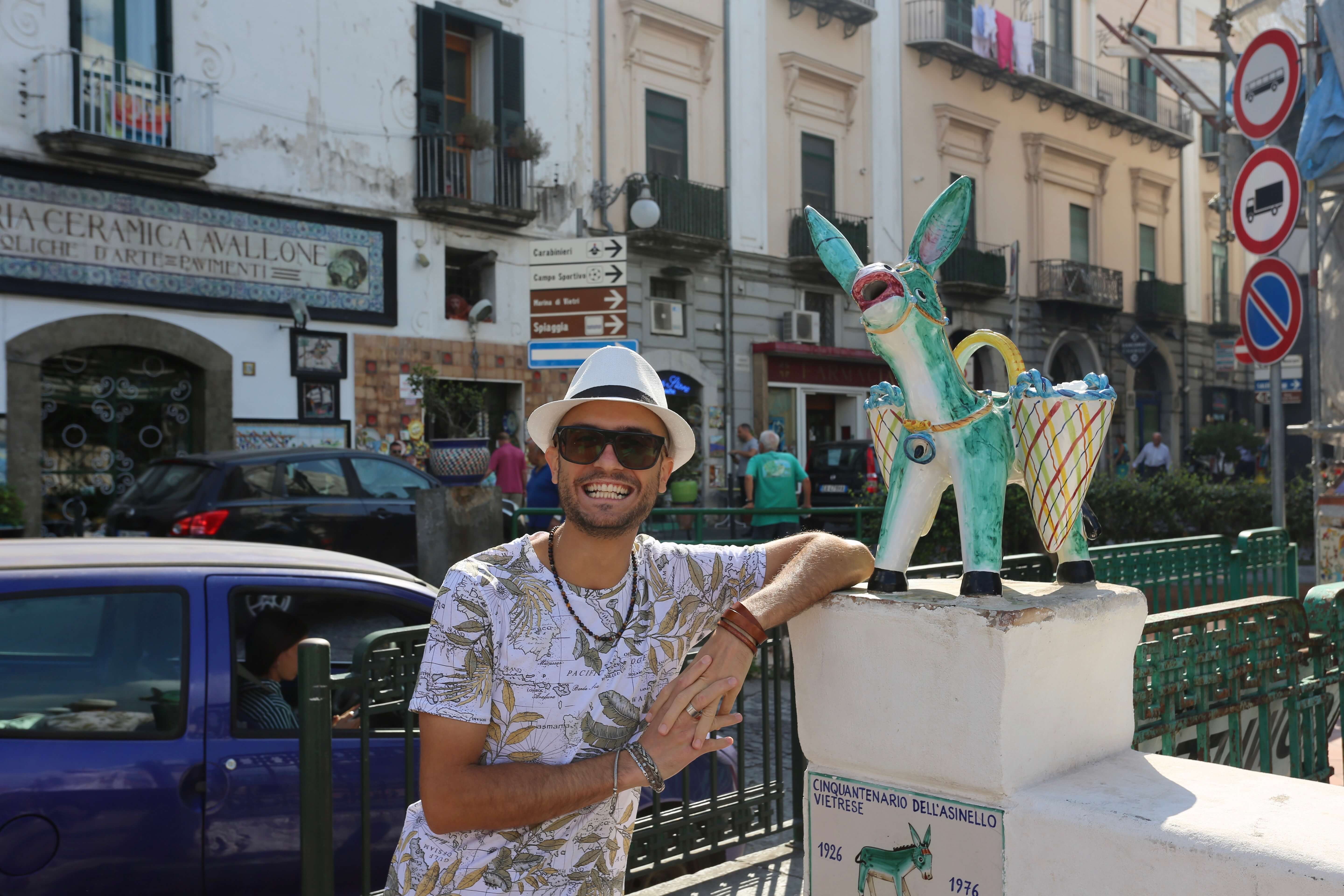 Alfonso Vincenzo Mauro was born on the Amalfi Coast and studied History and Philosophy at Naples University. He worked at Vietri sul Mare tourist office, and as a staff member for concert festivals; and is now interpreter and translator for wine tours at “Le Vigne di Raito” winery. A consummate leftist, he served as Vietri sul Mare mayor’s “political advisor” in matters of tourism and culture, and is the artistic co-director of “La Congrega Letteraria” culture festival in Vietri sul Mare since 2014. He served as a jury member at a few poetry contests around Italy, including his culture festival’s. In 2017, he appeared in an episode of HGTV House Hunters International. He loves reading, classical music & opera, baking, and wine.